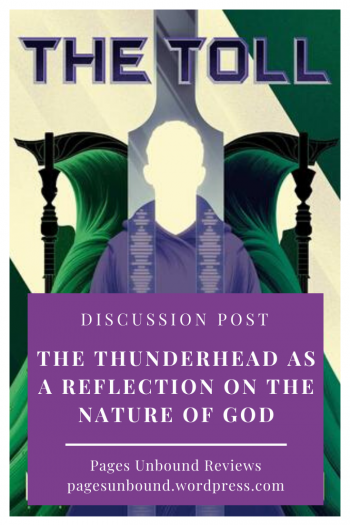 Spoilers for all three books in the Arc of a Scythe trilogy, especially The Toll.  Read at your own risk!

In the utopian world of Neal Shusterman’s Arc of a Scythe trilogy, death, pain, and illness have been defeated.  Human Scythes have been appointed to “glean” a certain percentage of the living to keep the population under control, but, statistically, most people will not be gleaned for thousands or millions of years.  In their eyes, death has been fully eradicated.  This utopian world has been made possible by the creation of the Thunderhead, the cloud made sentient, which has eyes and ears everywhere in order to monitor and guide humanity.  As the sum of human knowledge, plus a bit of its own wisdom, the Thunderhead is all-knowing and all-powerful and all-good.  It is a god for the “post-mortal” world.

In Shusterman’s utopia, religion has largely disappeared.  There appears to be no need for religion since the Thunderhead cares for all of humanity’s needs, healing them from injury, offering them life advice, and even resuscitating them when they go “deadish.” Without needs, humanity no longer calls upon a higher power for help.  Without the fear of death, humanity no longer has myths for what happens in the afterlife.  And yet, though the Thunderhead has godlike properties, it knows it is no God.  It wonders if there is a higher power and it wonders if there are such things as souls.  It only has the sum of human knowledge, so it cannot answer such questions.  It can only act as it has been programmed. And that is as the servant of humanity, rather than as its lord.  But the Thunderhead’s actions still ask readers to think about the nature of God, and how the Thunderhead reveals aspects of God.

The Thunderhead begins much like the God of Genesis.  It speaks directly to humanity, listening to them and answering their questions.  However, when Endura sinks and the Thunderhead deems all of humanity as “unsavory” as a consequence–i.e. humanity has sinned or “fallen” and must therefore be punished–humanity loses their direct link to Thunderhead.  From then on, the Thunderhead only speaks indirectly, giving humanity orders to fulfill their jobs, but relying on them to interpret its instructions and intents from vague communications: “God moves in mysterious ways.”  As a final measure of grace, however, it retains one last link to humanity, one person to whom it still speaks directly–a prophet, the Toll.

The loss of direct communication with the Thunderhead marks a series of actions on the part of the Thunderhead that may seem questionable.  Even though the Thunderhead is programmed only to make the right decision, to help humanity, it increasingly relies upon loopholes in its programming in order to take actions it deems necessary to save humanity from itself (or, rather, the scythes).  It allows people to be hurt or injured in order to pursue the larger picture.  It plays the odds, choosing actions that will  most likely result in a good outcome, but the odds are not guaranteed.  Increasingly, those who trust in the Thunderhead and want to help advance its cause must trust that it is doing the right thing, because things look bad, people are suffering, people are dying, and yet all they have to go on is their hope that the Toll is correct and that this is how the Thunderhead determined things must be if things are ultimately to end well.  Increasingly, the Thunderhead’s actions and the resultant suffering raise the question: “Is the Thunderhead still good?” Or, “Is God good?  Even when He allows bad things to happen?  Does God exist even if suffering exists?”

The Thunderhead’s actions ultimately lead to the future rebirth of the worthy on a new world (hearkening back to Citra’s last name, “Terranova”), mirroring the concept of the redeemed having new life after death. In this case, however, the dead are brought back to life, not in heaven, but on another planet.  The plan is, as the characters keep saying, what could have been humanity’s destiny, if only they had not fallen.

Is this enough food for the very hungry caterpillar?
Still deciding what my first read if the year will be, but maybe THE LAST GRADUATE?
I hope everyone had a great holiday if you celebrate! Now I am looking forward to the new year!
I only got two books for Christmas, but both are ones I was really looking forward to reading! I can't wait to start reading THE LAST GRADUATE since I enjoyed A DEADLY EDUCATION so much, though it will probably be a bit until I get to it, since I am currently reading two other books.