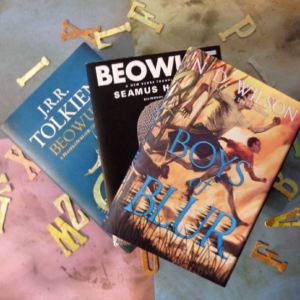 Beowulf is one of my favorite stories, and I’ve reread it again and again in different translations, trying to see it through different eyes and interpretations.  Translating Old English is not necessarily the simple task that non-experts might assume it to be; some words might appear in only a few or even one text, making their meanings unclear.  Readers can see this just from the poem’s famous opening word Hwæt, which has been variously translated as “Lo!,” “Listen!,” “Hark!,” “So!,” etc.  Yet despite the different versions of the text I have encountered, trends of interpretation seem clear; readers frequently seem to believe that the most interesting aspects of the text are either the historical context or the fights with the monsters.  This is not true for me.

Though Beowulf is, of course, an epic with swords and battles and boasting and great feats of arms, I’m attracted to the sense of sadness and loss in the poem, the sense that all these great things are passing away.  It is not the defeating of Grendel, his mother, and the dragon that move me, but rather the passing of Beowulf himself at the end of the poem.

There is a sense of glory in the story, of course.  It is inspiring to hear Beowulf boast, exhilarating to watch him live up to his words and do deeds that no one else can do.  Beowulf is the exemplary warrior—skilled, but also honorable, interested in fairness and protecting others.  He appreciates rewards of treasure, of course, but such was Old English culture; he is equally as free with giving his wealth away to those who deserve it.

This is fun, and I appreciate that J.R.R. Tolkien was instrumental in helping Beowulf to become appreciated as a story, one that features exciting fantasy monsters who epically meet their demise.  But Beowulf isn’t interesting because it features a lot of wrestling and sword-waving (really, no story is interesting solely because of that).  I love it because it ends with the sense that these times are passing away, that all of this is being lost.  The heroes are dying, and the world is moving on.  It’s less safe and less certain, and things will never be the same.

The end of the poem reminds me of other Old English works like The Wanderer, which includes the lines:

These are exactly the types of questions one expects Beowulf’s people to be asking once he is gone, and it’s tragic.  There is some hope in Wiglaf, the one warrior who stood by Beowulf’s side and did not flee while he fought the dragon, but it’s not enough.  Beowulf’s time is ending, and a new age is beginning.

I don’t think I’m the only person who thinks Beowulf is a sad poem, but it’s a point I rarely see emphasized.  The story is moving and memorable not simply because Beowulf is great but because no one else will ever be great in quite the way he was.

15 thoughts on “Beowulf: Epic Adventure or Tale of Loss?”