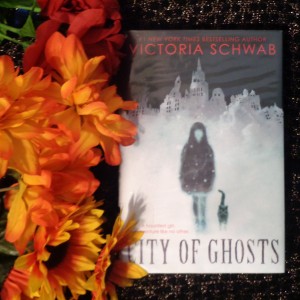 Cassidy Blake’s parents hunt ghosts.  But Cassidy is actually able to see them, ever since the moment she drowned and a ghost named Jacob dragged her back.  Now her parents are off to Edinburgh, Scotland, to film a ghost show.  But an evil spirit haunts the city and she’s determined to steal Cassidy’s life.

City of Ghosts is a pretty standard supernatural middle-grade story.  The characters are not particularly developed and the concept is not particularly original.  Rather, the story seems to rely on the travel aspect, combined with ghosts, to keep readers interested.  Readers new to this type of story will likely enjoy it more than those who have read their fair share of books featuring ghosts as best friends.

The problem with reviewing City of Ghosts is simply that it is not a very memorable story.  The idea of having a protagonist who has a ghostly friend and who fights other, evil ghosts is not exactly novel.  So City of Ghosts  faced the dilemma of making itself stand out from any other number of supernatural books.  However, it largely fails to do this–probably because Cassidy and her friend Jacob are barely fleshed out as characters.  They cannot bring a unique flavor to the tale because they really feel like they could be any character.  Who they are is not important to the story.  What matters seems to be simply that they can go through the motions to make the plot happen.

The plot, however, is really standard.  Cassidy can see ghosts and, while sightseeing, she stumbles upon a particularly nasty one who wants to steal her life force to gain power and do evil ghostly things.   This is the basic premise of a good number of ghost stories.  With no new angles and no interesting characters, it’s really just kind of nice.  A nice way to pass the evening reading.  A nice choice for a spooky fall read.  A nice middle-grade novel.  But it’s not going to end up on many “best of” lists.

If you’re looking for a middle-grade story featuring ghosts, this will suit your needs.  It has the added benefit of not being particularly scary, if that is what you want.  However, it lacks any real “wow” factor, so, if you are choosing between this and another supernatural title, the other title just might be the better bet.

11 thoughts on “City of Ghosts by Victoria Schwab”