My home library has had a scanty selection of superhero graphic novels for years.  I have suggested before that this could be due to a lack of funding, but also to the difficulty involved in figuring out which comics to buy.  So here are my suggestions for where libraries can start building their comics section for teen readers!

Captain Marvel may not be a teenage hero, but her recent movie has given her additional popularity–as if she needed it.  Carol Danvers is sure to appeal to readers with her bold, no-nonsense attitude, as well as her commitment to helping others, no matter the cost.

Den of Geek has an excellent guide to the reading order for Captain Marvel.  The easiest way to read seems to be to the Earth’s Mightiest Hero volumes.  However, if you have to choose a run, I highly recommend Kelly Sue Deconnick’s 2014 series, which includes Higher, Further, Faster, More (Vol. 1); Stay Fly (Vol. 2), and Alis Volat Propriis (Vol. 3).

Fifteen-year-old Riri Williams is an engineering student who makes her own iron armor to become a superhero.  With Tony Stark now existing as an A.I., it’s up to her to stop crime!  She’s a bold, confident heroine sure to inspire teen readers.

At nine years old, Luna Lafayette is the smartest character in the current Marvel universe.  And, thanks to the terrigen gas, she’s about to get super powers.  Even cooler, however, is her teammate–a dinosaur!  Everyone loves dinosaurs, so clearly this is a great purchase for any comics collection!

Sixteen-year-old Kamala Khan loves superheroes, but she never expected to become one herself. Now that she has the ability to change appearance, however, will she find herself trapped in others’ expectations or will she find the strength to be herself?  Kamala’s story is particularly powerful precisely because of who she is. Muslim, and dark-skinned, she finds it difficult to fit in at school, even when others are not consciously drawing attention to her “otherness”–her clothes, her religion, her parents’ rules. She doesn’t want to give up her faith and she loves her family, but she has that desire common to us all–the desire to belong.  But she finds strength in religion, in her family, and in her beliefs–and that makes her truly inspirational. 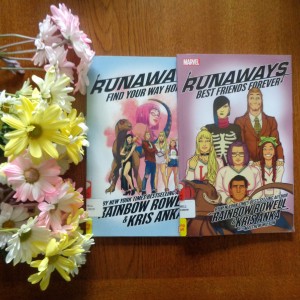 Rainbow Rowell’s Runaways is perfect for readers new to comics as it provides all the information necessary for readers to jump right in.  Plus, the colors are bright and bold, the humor is fresh, and the  young characters are sympathetic.  There’s really nothing not to love about Rowell’s take on the comic started by Brian K. Vaughn and Adrian Alphona!

Spider-Gwen is secretly college student Gwen Stacy in an alternate universe.  In her reality, Peter Parker died and she became the masked hero known as Spider-Woman.  Gwen’s a little angsty, but young readers may relate to Gwen’s feelings that she has to do it all, but trying is making her fall apart.

There are six collected volumes of Spider-Gwen.  And now there seems to be a new series called Spider-Gwen: Ghost Spider.

Miles Morales is a relatable teen protagonist concerned with friends, family, and school–but also, of course, with fighting evil.  His adventures will appeal to readers eager to see more diversity in comics and to readers ready for a new, young Spider-Man facing contemporary issues.

With Thor Odinson unworthy to wield the hammer, a new (female) Thor steps into the role!  The identity of the new Thor is a mystery, but she is certainly up to the challenge!  This is a fresh new take on Thor, sure to appeal to readers open to expanding the possibilities of what it means to be a hero.

You can begin with Volume 1: The Goddess of Thunder and Volume 2: Who Holds the Hammer?  Continue with volumes 1-5 of The Mighty Thor by Jason Aaron, et al.

Doreen Green is a computer science student, but also secretly the superhero known as the Unbeatable Squirrel Girl.  Her unfailing belief in the goodness of people is her true secret weapon, however; she prefers to rehabilitate villains when possible, instead of simply punching them.  Her comics have a quirky humor sure to win over readers.

Begin with Volume 1: Squirrel Power.  Ryan North and Erica Henderson’s comics provide all the background information readers need to start with this series and this hero. 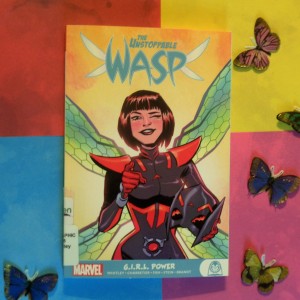 Nadia has escaped the Red Room and is eager to meet the father who never knew she existed–Hank Pym.  Unfortunately, Hank is dead.  Still, Nadia wants to live up to his legacy and save the world; she’s recreated his technology and become the Unstoppable Wasp for just that purpose.  But the Red Room is not ready to let her go.  Nadia’s upbeat personality and desire to see the good in everyone makes him a charming protagonist.  Perfect for fans of the Unbeatable Squirrel Girl.

Available in two volumes (Unstoppable! and Agents of G.I.R.L).  Or simply buy The Unstopabble Wasp: G. I. R. L. Power, which includes the comics from both those previous volumes.

What Marvel comics do you think the library should stock for teen readers?