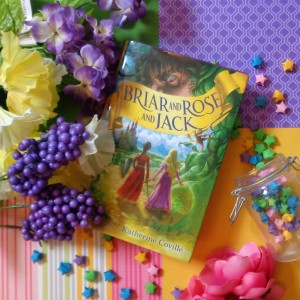 Sumptuous storytelling combines Sleeping Beauty with Jack and the Beanstalk in a magical exploration of prejudice, justice, and the meaning of true love.

Lady Briar is scorned for her appearance. Princess Rose is adored for her looks. Unbeknownst to them, one or both may bear a curse that only true love can break. But the girls have little time for curses anyway—along with their friend Jack, they are busy plotting the downfall of the evil giant who plagues their kingdom. But how can children succeed when the adults are afraid to even try? And what if the curse manifests? Whose love could be true enough to save the day?

Briar and Rose and Jack, a middle grade fairy tale retelling that mixes “Sleeping Beauty” with “Jack and the Beanstalk” and elements from some other tales, has a premise that could be utterly charming or completely generic.  After all, retold fairy tales are a dime a dozen, and putting a new spin on them can be difficult.  Katherine Coville, however, does manage to make these stories her own.  Though the elements might be familiar—even plot points like young princesses who slipped “disguised” into the village to meet with the commoners—the characters and the details make Briar and Rose and Jack really stand on its own.  While there are some points I think could have used more development, overall I enjoyed going with the protagonists on their adventures and watching them as they grew.

Though I did love watching the protagonists develop over the course of years, I’ve seen some other reviewers balk at the fact the story goes from Briar and Rose’s birth to their sixteenth birthday, but I think this stems largely from the fact that publishers have managed to pretty rigidly define “middle grade” as “books that feature characters who are 12 or maybe slightly younger.”  However, Coville’s story simply follows in the footsteps of a number of children’s classics that think young readers perfectly capable of reading about and caring about teen protagonists—like the original fairy tales or retellings like Disney’s “Sleeping Beauty.”  Kids love these stories, even though they’re about teens.  I also think writing about teens for a middle grade audience gives Coville the opportunity to actually write realistic teens.  They’re mature, of course, but they’re also young.  A lot of teen protagonists in YA books read as if they could be replaced with a twenty-five year old with no change to the book, so seeing teens act like teens here is actually refreshing.

I’ve also seen some complaints about the prose.  Personally, I do think Coville lays it on pretty thick, especially at the beginning and the end of the novel, in what seem like attempts to write particularly mystical or lyrical prose, and I was not personally a fan.  However, I disagree with assertions that the prose is complicated or the sentences too long for a middle grade audience.  I understand this gut reaction from a lot of readers, but, again, I think this is largely due to the influence of the middle grade market as it now stands.  Upon some reflection, I decided I would have been perfectly capable of reading this book when I was in the target age range, and in face I did read a lot of books with similar prose styles.  Kids have different reading levels, of course, but I think a lot will be fine with this.

But, really, despite Coville’s attempts, the prose is not the magical part of the book.  The beauty is in the characterization and in the subtle differences Coville managers to write into each character’s personality and their relationship with other characters as time passes circumstances in their lives change.  For instance, Briar and Rose are always fast friends, but their relationship changes as they turn from children to teens, as they develop different interests and different friends and even romances.  It’s often subtle, but the other has a good understanding of human nature.

This is also the only book I can confidently point to that I’ve read recently that made me cry.  There’s a scene maybe three quarters through the book where Briar experiences a ton of emotions (I’m being vague to avoid spoilers), and I felt them along with her and was incredibly moved.  Unfortunately, I was also on a train.  The beauty of this scene really struck me, however, and in my personal opinion, it compensated for other flaws of the book.

The flaw I could not get over, however, was the ending.  There are characters who inflict a lot of pain in the book, and it’s unsatisfactorily dealt with at the end.  Even when other characters confront them, the moment seems to pass too fast.  They’re largely forgiven and their ills forgotten as if they need not make reparations and as if people aren’t going to be affected by their negative behavior for years to come.  I don’t need books to have a moral, but since Briar and Rose and Jack was generally strong on characterization, I was surprise to see a lack of real exploration of some major issues when it most mattered, at the end.

Generally, however, this is a fun and engaging story.  If you like fairy tale retellings, you’ll probably want to check it out.

4 thoughts on “Briar and Rose and Jack by Katherine Coville”