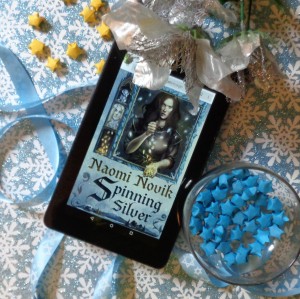 Miryem is the daughter and granddaughter of moneylenders… but her father isn’t a very good one. Free to lend and reluctant to collect, he has loaned out most of his wife’s dowry and left the family on the edge of poverty–until Miryem steps in. Hardening her heart against her fellow villagers’ pleas, she sets out to collect what is owed–and finds herself more than up to the task. When her grandfather loans her a pouch of silver pennies, she brings it back full of gold.

But having the reputation of being able to change silver to gold can be more trouble than it’s worth–especially when her fate becomes tangled with the cold creatures that haunt the wood, and whose king has learned of her reputation and wants to exploit it for reasons Miryem cannot understand.

Spinning Silver is a beautiful story about identity, independence, and getting what you’re owed. When protagonist Miryem becomes tired of her moneylender father never having the fortitude to collect what people have borrowed, she takes up the task herself—to mixed reaction.  Her parents, and frequently the narrative voice, worry that the job has made her “cold,” but she knows she is only taking what is hers, which most of the borrowers can actually afford to pay, and readers will likely cheer for her as she navigates judgement, attempted violence, and other dangers to make herself a home and an identity of which she can be proud.

The world is one like ours but also inhabited by the mysterious and unmerciful Staryk, a somewhat fae-like race whom humans avoid at all costs.  Novik does a masterful job with the world building, showing readers things that are familiar along with ones that are new, and though the world seems harsh and unforgiving at times, particularly to people like Miryem’s Jewish family who don’t quite fit in or aren’t quite welcome, it’s one that’s so vivid and so intriguing that I find myself wanting to visit.

Novik also skillfully weaves a number of stories together as the book progresses, not just Miryem’s and the Staryk’s, but also that of the tsar, the new tsarina, Miryem’s servant (for lack of a better word), and her brothers.  All the characters are struggling against chains and trying to break out of the choices that others have made for them in order to forge their own paths—though it turns out, of course, that the decisions other people make (even if they’re not thinking of you at all) will always have an influence on your life.  Seeing the different interactions between the characters and watching their stories finally begin to come together is fascinating, and it shows Novik’s talent for structuring a complex story.

Finally, I was intrigued by the representation/characterization of the Staryk, as the interactions between them and humans highlights many of the themes of the book and helps the characters see things more clearly.  The Staryk are fae-like, as they live in a kingdom mostly inaccessible to humans that operates on different rules, both physical and social.  They are unforgiving and have practically no interest in humans, whom they will kill like inconvenient animals, particularly for crimes like hunting “their” animals in the woods (yes, the woods in the human world).  Part of the story is about seeing the Staryk as people rather than the Other, which one of the characters then uses to draw a parallel to how Jews are frequently Othered in the human world.  However, I was particularly interested in the ideas the Staryk have about debt/gifts/promises, which are, well, Fae-like and very different from humans.  (I may be biased because I did some research on gift theory in grad school, and I think there’s a lot to unpack in Spinning Silver about gifting and exchange.)

Spinning Silver is long—I felt as if I’d been reading forever only to realize I was about 1/3 of the way through the book—but the story is worth it.  This is very likely to be on my list of Top Books I Read in 2019 at the end of the year, due to the fabulous world building and characterization and the thoughtful questions the story raises.