Every year on March 25, the anniversary of the Downfall of Sauron, the Tolkien Society hosts Tolkien Reading Day. This year’s theme is Tolkien and the Mysterious. The primary goal is to promote the reading of the works of J.R R. Tolkien! To celebrate, Pages Unbound will be hosting two weeks of Tolkien-related posts. In addition to our own thoughts, we will be featuring a number of guest posts!

I am not the biggest Tolkien fan in the world.  I still haven’t finished The Silmarillion!  But it would be very hard for me to overplay how important Tolkien has proven for my life.

I first picked up Tolkien when I was very young (sometime in elementary school).  Some fantasy had come into my hands—some book or another, or perhaps the original Final Fantasy game on the NES.  My mom said, “You know, if you like that, there is a book you would like . . .”  I’m not even sure if my mom has ever read The Hobbit, which is a testament to its cultural cache.  I did not immediately acquiesce.  I was a pretentious child—before I became a man and put away childish things like the fear of seeming childish—and I initially rebuffed my mom’s efforts.  But a book is a book, and I didn’t have so many laying around in those days, so I didn’t wait long before reading it.

I was already a reader, but The Hobbit threw gas on the fire.  I blew through it and tore into The Lord of the Rings.  Rereading it as a busy adult, I can see why the slow start throws people off.  But I loved every word as a kid.  I reread it many times, burning through all three books in a day sometimes.  It was a joy and an escape.  My brother died when I was 11.  My memories are hazy, but I was fiddling with The Lord of the Rings: Adventure Game rpg that week.

I grew older and read many more fantasy books.  I left for college and then moved across the state to work.  I read much less, and more of that non-fiction or non-speculative fiction.  I perhaps would have left fantasy behind entirely, but for Peter Jackson’s adaptation of The Lord of the Rings and a new book in The Wheel of Time every couple years.  It was the resumption of The Wheel of Time, when Brandon Sanderson took over for Robert Jordan, that pulled me back in.  I started reviewing books on Amazon.  Four years later I started my SF book review blog, Every Day Should Be Tuesday, and began reading fantasy and science fiction much more broadly.

One might ask if Tolkien retains any relevance.  Perhaps I and speculative fiction have moved on?  I had let my copies of The Hobbit and The Lord of the Rings grow dusty for many years.  I may not have even reread them since before Jackson’s movies.  Returning to Tolkien’s work this past summer showed me Tolkien still has very much to teach me.

The Hobbit and The Lord of the Rings remain as entertaining as they ever were, and I found also a depth I was better able to appreciate as a man.  I chose The Hobbit to read to my daughter in the womb (and out of it, since I wasn’t quite able to finish).  I effectively read it three times last year—out loud to my daughter, in the usual fashion, and dissected and annotated in John D. Rateliff’s The History of the Hobbit.  It did not suffer from the repetition.  I still think it is as close to a perfect fantasy book as you can get, and as slightly exceeding The Lord of the Rings.  The prose is both simple and poetic.  The story silly and scary.  Queer Lodgings and Flies and Spiders are maybe the two best consecutive chapters in English literature.  And, yes, the older, busier me can see why the dilatory start to The Fellowship of the Ring throws people off, but good things come to those who wait.  It deserves its place in the fantasy and English language canon.  It is pulp enough people can attempt to mock it as entertainment for 12-year-olds and literary enough that the International Congress of Medieval Studies hosts an entire track on Tolkien. 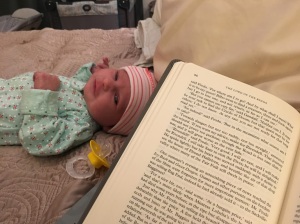 But as I returned to his work, it was Tolkien the man who made a bigger impression on me than his work.  My daughter was born as I prepared for my summer Tolkien 101 blog series, and I had just started a new career in academia.

Tolkien chose to live his life as a certain kind of man.  He came from and re-entered the upper middle class.  He held a chair at the most prestigious university in England for 34 years and published two landmark works in his field (his edition of Sir Gawain and the Green Knight and his lecture Beowulf: The Monsters and the Critics).  He of course came to international fame with The Hobbit and The Lord of the Rings.

But he chose to live a “middle-class, conventional, well-regulated existence . . . because he believed it was the right way to live.”  He learned respect for working class Brits “in the trenches” of France and maintained “a deep admiration for ordinary people—butchers, police officers, mail carriers, gardeners” throughout his life.  For all his success as a writer of scholarship and fiction he was infamously dilatory in completing projects—perhaps because he attended Mass daily and wrote elaborate Christmas stories for his children.  The views reflected in The Lord of the Rings—with its heroic, deeply admirable working class Sam and its esteem for nature and the simple life—were reflected in his personal life.  (All quotes from The Fellowship by Philip and Carol Zaleski.)

Tolkien’s life, then, offers lessons for me as I attempt to balance seemingly endless demands among reading and commenting on fiction, family, faith, and work.  It is within our power to choose to live in a way we believe to be right.

3 thoughts on “My Personal Journey Reading Tolkien (Guest Post by H.P. @ Every Day Should Be Tuesday)”