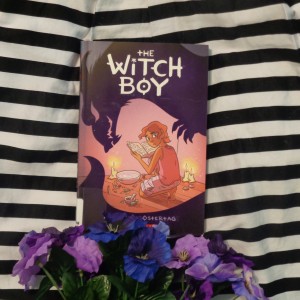 In Aster’s family, girls grow up to be witches and boys grow up to be shapeshifters.  But Aster wants to be a witch, too, even if  he has to keep spying on the girls’ lessons.  Then the boys starts disappearing.  Can Aster help find them with his witch powers?

The Witch Boy grabs readers from the start with a sympathetic portrayal of a boy who longs be a witch, but is denied lessons by his family.  In thirteen-year-old Aster’s world, girls are witches and boys are shapeshifters.  Those who long to do things differently are shunned, maybe even cast out.  But Aster is as determined as he is kind, and readers will find themselves cheering him on from the start.

The plot of The Witch Boy is not particularly original, and most readers will likely be able to predict the ending from the start.  The story, however, does not need to rely on the element of surprise to be engaging.  Rather, it relies on its characters, especially Aster and his new friend Charlie, a girl who believes her school should allow her to play all the sports the boys get to play.   Their frustrations will resonate with readers, who will share Aster’s pain, admire Charlie’s optimism and openness, and, above all, hope the two will find acceptance and friendship.

Much critical attention has focused on the theme of gender acceptance in this story.  And this, of course, is a crucial element, one to be celebrated not only by librarians and teachers, but also by anyone longing to find a book where the characters are shown to be perfect just the way they are, even if they are different.  The narrative deals with this theme realistically and sensitively.  Aster’s family are shown to be loving, but not everyone is sympathetic to his dreams and even the ones who mean well often try to guide Aster into more traditional channels, believing they are acting for his own good.  Their path to understanding is a key part of their story as they are not bad people, but simply people learning to readjust their thinking and learning to listen.  Crucially, the story holds out hope that such change is possible.

The Witch Boy is a fast-paced graphic novel with a sympathetic protagonist and a topical message.  Readers who enjoy books on witches or books about finding one’s place in one’s family will enjoy this story.

6 thoughts on “The Witch Boy by Molly Ostertag”