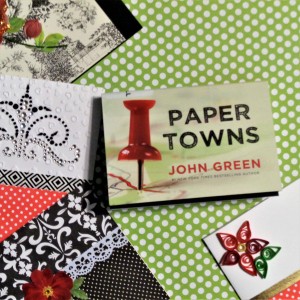 Quentin “Q” Jacobson has had a crush on his neighbor Margo Roth Spiegelman forever, but they have not spoken for nine years.  Then one night she appears at his window and asks for a ride around the city she wreaks revenge on her enemies.  The next day, she disappears.  Q believes Margo has left clues to her location, and that she wants him to find her.  But how far is he willing to go to chase an ideal?

I feel conflicted about Paper Towns because I personally hated the main characters and I constantly had the sense that the book was trying a little too hard to be deep.  However, I cannot help but wonder if John Green was actually doing something interesting, despite my visceral response to the story.  The story centers eighteen-year-old Quentin “Q” Jacobson and his obsessive crush on popular girl Margo Roth Spiegelman, whose name is always said in full and intoned like a prayer.  To Q, Margo is badass perfection, a girl who lives life to the fullest in a way no else dares.  He worships his ideal of her.  And, of course, in the end, he must realize his dreams were always only in his head.  Maybe this is a worthy story, a wise coming-of-age tale.  But Margo is so obnoxious, readers know from the start that Q’s ideal must be dashed.  Why read hundreds of pages just to see it happen?

Maybe I would enjoy reading hundreds of pages to see Q’s personal journey, if I cared about Q or about Margo Roth Spielgelman.  But Margo is far from likeable.  She and Q were friends as children, but they do not speak for nine years, until Margo arrives at Q’s window in an obvious attempt to “fix” him by taking him on a spree of revenge and vandalism.  You see, Margo’s idea of “carpe diem” is breaking into homes, playing mean-spirited pranks, and actively harming people.  She spray paints her initials on walls and cars like she thinks she is Zorro fighting for justice.  And Q buys it.  He really believes she has a passion for life, that everyone should be more free-spirited and open and daring like Margo Roth Spiegelman.  And Margo?  Oh, she believes it, too.  Her contempt for poor rule-abiding Quentin who does his homework and cares about college is palpable to probably everyone but Quentin.  And she thinks she is gracing him with her crime spree, teaching the poor boy how to break out of his shell.

Readers will understand that Margo is not as free-spirited as she wants to appear.  She is clearly troubled, possibly in part because of her home life.  But I still couldn’t stand her.  Like Q’s friend Ben, I thought Margo was selfish and playing games to get attention.  And, like Q’s friends, I was annoyed he bought into the game.  Q doesn’t even know Margo–they move in completely different social spheres–but shows himself willing to throw away everything he’s worked for to chase her.  He lies to his parents, starts to skip school, and ignores his friends.  He thinks everyone else should give up their lives to help him get Margo.  And he’s one of those guys who seems to think girls should date him because he’s “nice.” Except I’m not convinced he is.

Now, all of this is very interesting.  John Green, I think, created Q as a protagonist who is supposed to be a sort of “average” teenage boy.  He’s generally “nice” but a little dorky and overlooked.  He’s not perfect.  He is a poor friend and he lies to his parents and he is obsessed with the idea of a girl because he doesn’t actually know her.  And he’s friends with Ben Starling, whose obnoxious sexism (He calls girls “honeybunnies” and talks constantly about how he would pleasure them, if given the chance.  He also likes to joke about getting it on with…Q’s  mom.) will likely make many a reader want to throw the book across the room.  Yes, the teens here are very realistic.  But that doesn’t mean I want to read about them or that I think any girl should ever give Ben Starling the time of day.  (Indeed (spoilers), the fact that popular girl Lacey does start to date Ben reads like a teenage boy’s fantasy, and not like a realistic depiction of how the average female would respond to being called a “honeybunny” and listening to a guy brag about his genitalia just about every time he speaks.

Honestly, I think the only reason I finished Paper Towns was because I was trying a Penguin Mini and I was intrigued by the experiencing of holding my book in one hand and flipping the pages vertically.  I really loved the Penguin Mini!  But, until Penguin Mini releases books not by John Green, I might have to pass on reading them.  Because Paper Towns makes me never want to read a John Green book again.