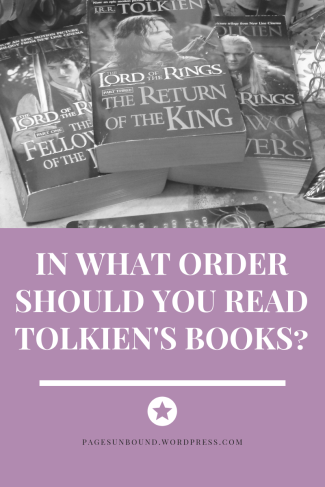 As I’ve been reading Christopher Tolkien’s new releases of his father’s work over the past couple years, I’ve been repeatedly struck by the notion that the books are really for Tolkien fans and not so much for Tolkien newcomers.  Most recently, I wondered if The Fall of Gondolin would make sense to anyone who hadn’t read The Silmarillion or perhaps even The Children of Húrin.  And that led me to wonder how I would recommend newcomers to approach Tolkien’s work.

I know some people like to read authors’ works in chronological order, but that may not be the best approach with Tolkien.  Instead, I recommend mostly following publication order, which I explain below.

You could start with The Lord of the Rings and then go back to The Hobbit, and things would still make sense, but I recommend starting with The Hobbit because the events do take place right before The Lord of the Rings (ok, a few decades before) and provide some context for what certain things, characters, events. etc. are.  Just keep in mind that the writing style is very different from The Lord of the Rings, and you may find you like one book more than the other for this reason.

2. The Lord of the Rings

This is Tolkien’s major work and probably the reason someone is trying to read his books at all. So read it next!

If you want to go deeper into the lore of Middle-earth, you have to read The Silmarillion. Some of the stories are referenced in The Lord of the Rings, and reading more about them will help you understand the history of Middle-earth as a whole. It provides some context on who Sauron is, for instance, and where he came from. (And it’s a good story on its own. Just keep in mind that, once again, the writing style is going to be different from both The Hobbit and The Lord of the Rings.)

The Great Tales of Middle-earth

These three books are all elaborations of stories that are told in The Silmarillion, so read them next. The Children of Húrin is arguably the most approachable, since it’s a full narrative, while Beren and Lúthien and The Fall of Gondolin take a different approach: Christopher Tolkien shares different drafts his father had of the stories and doesn’t try to pin down a streamlined “official” story.  However, in terms of chronology, you probably want to read Beren and Lúthien first here.

4. Beren and Lúthien
5. The Children of Húrin
6. The Fall of Gondolin

The History of Middle-earth

7. The 12-volume History of Middle-earth series edited by Christopher Tolkien

If you’re really into Tolkien at this point, consider reading this collection of various drafts of stories related to Middle-earth. As Wikipedia describes it: “It is not a ‘history of Middle-earth’ in the sense of being a chronicle of events in Middle-earth written from an in-universe perspective; it is instead an out-of-universe history of Tolkien’s creative process.”

You can also check out this very detailed timeline at the Lord of the Rings Wiki.  Or this general advice for reading Tolkien that Krysta and I previously shared in a guest post at Chasm of Books. 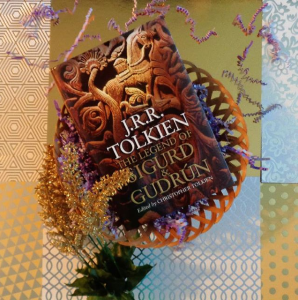 If you like Tolkien, at this point you may also want to read some of his works not set in Middle-earth.  The list is actually fairly extensive, encompassing children’s stories, translations of Old/Middle English texts, re-imaginings of medieval stories, nonfiction scholarly work, etc.  The order here you read this books doesn’t really matter; what’s most important is what interests you.  For a very complete bibliography, check out the Tolkien Library’s website.  However, here are some of my personal suggestions:

What order do you recommend reading Tolkien’s books in?

12 thoughts on “What Order Should You Read J.R.R. Tolkien’s Books In?”

I tend to read more fantasy than contemporary, but I loved this ARC of SPEAK FOR YOURSELF by Lana Wood Johnson I recently won in a giveaway. 5 star review coming on the blog in Sunday!
Surprise #bookmail from @scholasticinc. Apparently I won a giveaway!
I won this ARC of this cute book for elementary school readers, MAYBE MAYBE MARISOL RAINEY.
⭐ Exactly how obsessed with Tolkien are you? Casual fan? Super fan? You don't care at all and can't wait until I stop posting #Tolkien stuff?