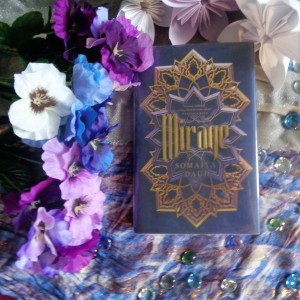 Eighteen-year-old Amani imagines she will grow up on her “backwater moon” like the rest of her family, now that the Vathek empire has conquered their star system and impoverished the citizens.  But then a droid kidnaps her and brings her to the palace.  There she is expected to be a body double for the cruel princess Maram, a woman so hated that her family does not believe she can appear in public without being killed.  Amani initially agrees just to survive. But when she begins to fall in love with Maram’s betrothed and to listen to rebel whisperings, things suddenly become much more complicated.

Set in a science-fiction world inspired by Morocco, Mirage is an engrossing YA fantasy peopled with vivid characters.  From the first pages when Amani is ripped from her home and forced into a life of subservience, readers will find themselves empathizing with her loss and hoping for her to find new strength.  Her story intertwines with that of a cruel princess who fears to change and prince who mourns his past but shows little desire to go chase it.  The story is centered around the ways in which these characters affect one another and grow.  Although the plot and the character development are ultimately predictable, Mirage deviates enough from standard YA conventions that it manages to feel fresh.

The characters are perhaps the book’s greatest strength as each reveals hidden depths over the course of the story and each shows an ability to change.  Readers will readily anticipate most of the character development, and yet that does not make it any less satisfying.  Mirage celebrates resilience and bravery, particularly bravery of spirit rather bravery in combat.  That each character reveals a little of such traits gives the book a hopeful feeling, one mirrored in Amani’s growing understanding that she is responsible for her own destiny.

If the book possesses a major flaw, it is that it does meaningfully utilize its sci-fi setting.  The Moroccan-inspired setting of the planet where Amani is held captive is drawn lovingly and in detail.  The planet and the way its people have been shaped by and shape it seem like characters themselves.  However, Somaiya Daud does very little with the planetary system she has set up.  It is, in fact, incredibly easy to forget that Amani hails from a moon and that planets and moons are involved in this story at all.  I do not see the point of setting a story in space if it could just as well have been set in a fantasy world on one planet.

Overall, however, Mirage is a compelling fantasy written in effortless prose (not the overwrought “lyricism” many YA authors try for).  It feels effortlessly immersive and easily captures the sympathy of readers for its cast of characters.  It is little wonder that Mirage has proven so popular or that so many readers eagerly await the sequel.

20 thoughts on “Mirage by Somaiya Daud”

I cannot wait to read THE BALLAD OF NEVER AFTER by @stephanie_garber and this @owlcrate edition is beautiful!
New mass market #silmarillion so I don't ruin my fancy one! 😮
Flashback to when the teen section in Barnes and Noble sold these short paperback fairy tale retellings.
Some unexpected #bookmail from @quirkbooks! It's a picture book adaptation of FERRIS BUELLER'S DAY OFF.