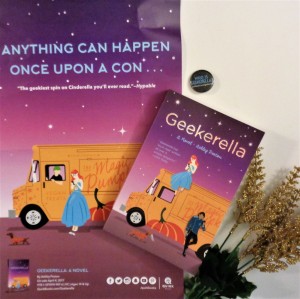 Geek girl Elle Wittimer lives and breathes Starfield, the classic science-fiction series she grew up watching with her late father. So when she sees a cosplay contest for a new Starfield movie, she has to enter. The prize? An invitation to the ExcelsiCon Cosplay Ball and a meet-and-greet with the actor slated to play Federation Prince Carmindor in the reboot. With savings from her gig at the Magic Pumpkin food truck and her dad’s old costume, Elle’s determined to win – unless her stepsisters get there first.

Teen actor Darien Freeman used to live for cons – before he was famous. Now they’re nothing but autographs and awkward meet-and-greets. Playing Carmindor is all he has ever wanted, but Starfield fandom has written him off as just another dumb heartthrob. As ExcelsiCon draws near, Darien feels more and more like a fake – until he meets a girl who shows him otherwise. But when she disappears at midnight, will he ever be able to find her again?

Part-romance, part-love letter to nerd culture, and all totally adorbs, Geekerella is a fairy tale for anyone who believes in the magic of fandom.

I love fairy tale retellings, but if you had asked me before I read Geekerella if it were possible for someone to write a take on “Cinderella” that felt fresh, I probably would have said no.  The plot line is so well-known and in some ways so straightforward that I don’t even read a lot of retellings of it anymore; I tend to turn towards more obscure fairy tales.  However Poston’s take on geeky Cinderella who meets her Prince Charming at a con does put a lively twist on the tale, even as it follows the well-worn lines of the story. I don’t think I’ve had this much fun reading a book in a long time.

The book raises some interesting questions about what it means to be a “true fan” of something and explores the good and bad sides of geek culture. I’ve seen some arguments that the premise is absurd because geeks aren’t even outcasts anymore, and while it’s true that geek culture has never been more mainstream, I think it’s important to note here that Elle and her ilk are hardcore fans of the fictional show Starfield.  We’re not talking the type of fan who, say, just really likes The Lord of the Rings or Star Trek. We’re talking about the type of fan who speaks Elvish or can tell you what color earring someone was wearing in in scene 3 of episode 12.  I think these type of fans do still get side-eyed for being a bit weird.

However, ultimately the story is just pure fun, and I don’t think readers should over-think it.  The most common description I’ve seen is “super cute,” and this hits the right note.  So, while parts do read as “unrealistic” (I mean, a teenage fashion designer driving a vegan food truck named the Magic Pumpkin who goes on a badass mission with it, mowing over barriers at a country club does strain credulity), that’s part of the appeal. Geekerella is a crazy, improbable, but amazingly enviable adventure where the geeky girl next door has a chance to nab a movie star boyfriend who shares her geeky interests! So, yeah, cute.

This book will resonate with readers who have ever felt out-of-place or who ever just dreamed of something this unlikely happening to them. “Cinderella” is all about the right circumstances converging to make someone’s life brighter than it had been before, and Poston taps into that to write a compelling take that walks the line between normal high school life and fantasy. Definitely a recommended read from me.

Note: Goodreads tells me this is the first book in a series, but it definitely reads as a standalone. It looks as if book 2 might be a companion book more than a sequel.

11 thoughts on “Geekerella by Ashley Poston”

Some unexpected #bookmail from @quirkbooks! It's a picture book adaptation of FERRIS BUELLER'S DAY OFF.
I caved and ordered this past #owlcrate box just so I could have the Shire bowl. Now to get the rest of the #lotr bowls!
I enjoyed reading this ARC of ALLIANA, GIRL OF DRAGONS by Julie Abe, a cute story inspired by "Cinderella" and with, you guessed it, dragons! I think I would have loved this as a child, and it should be a hit with the target audience. Full review coming on the blog on Saturday.
I won a giveaway!