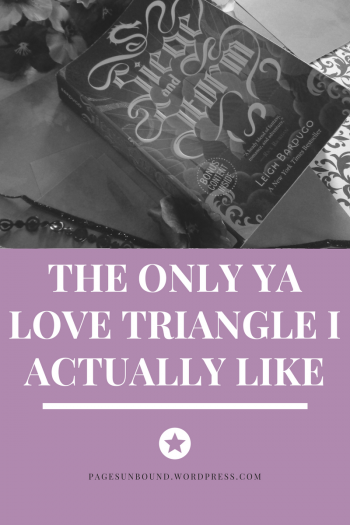 Ever since Twilight and The Hunger Games, it seems YA has been inundated with love triangles.  Generally, I have found these boring and poorly written.  After all, I have never read a YA love triangle and predicted the wrong outcome.  Our female protagonist typically has two choices: the kind and honest boy (often her childhood friend) and the dark, brooding, mysterious evil villain.  Or, if he is not a villain, he is generally at least troubled, violent, angry, or otherwise obviously the unhealthiest partner the protagonist could ever hope to find and be in a relationship with.  I can never fathom why authors would pretend that the second boy is even an option for our protagonist.  Anyone with sense can look at him and want to scream, “Run, dear protagonist!  It’s not your job to save him!”

Leigh Bardugo, however, takes the YA love triangle and does something new with it.  In her Grishaverse trilogy, Alina has two options: her steady childhood friend Mal and the mysterious, powerful Darkling.  Alina has been in love with Mal a long time.  He, however, seems oblivious to her existence and is sleeping around with other girls.  So it’s not particularly surprising that Alina, when separated from him, would move on.  Or that Alina, feeling lonely, overlooked, and rejected, would fall in love with the Darkling.  He actually pays attention to her.  He listens to her, supports her, and encourages her.  He finds her beautiful.  Meanwhile, her letters to Mal remain unanswered.  Alina recognizes that it is time to stop pining over a lost cause.

From the start, the love triangle is already refreshing.  Alina is not stringing two different boys along, kissing one on Monday and one on Tuesday, wondering which one she truly loves, and making them wait while she tries to figure it out.  Instead, Alina realizes that her first crush is not going to work out and then she simply begins to look elsewhere. This is not being fickle–Mal has indicated to her for years that he has no interest in her.  Alina has no reason to wait around even longer, hoping that one day he’ll stop sleeping with prettier girls and realize she’s really the one for him.  She’s being realistic when she decides to pursue someone else.

However, the real beauty of Bardugo’s love triangle occurs when Alina discovers the Darkling’s true character.  He presented himself to her as noble, caring, and attentive.  Then she learns that he was seducing her so he could control her, so he can use her power to rule over the world.  Alina immediately stops pursuing a relationship with the Darkling.  That’s it.  She does not continue to moon over him, to wonder if she should leave Mal to him, to plan how she can save him because she is the only one who truly understands him.  She burns those bridges, rebuilds her relationship with Mal, and sets about trying to find a way to stop the Darkling.

At this point in the story, Mal does finally realize that Alina is the girl for him and Alina chooses him right back.  The Darkling is still pursuing her, and Alina does feel some attraction to him, but she never allows herself to indulge in those feelings.  And this is where the love triangle becomes really original and–dare I suggest–really realistic.  Alina is attracted to the Darkling not simply because he is handsome, but also because she did have some tender moments with him, and she must be wondering how much of those moments were true, and what would have happened if they could bloom.  But she recognizes these feelings as daydreams–she does not use them as an excuse to go back to the villain.

Alina also recognizes that the Darkling has power, status, and talents that match hers, whereas Mal does not.  That is, she recognizes that, quite simply, that relationships where partners are unevenly matched often present obstacles.  If she were with the Darkling, she would not worry that her partner feels out of place in her higher social sphere.  She would  not start to worry that he does not understand her power or to feel that she should hide her talents to make him feel more comfortable.  She does worry about these things with Mal.  Again, her attraction to the Darkling is realistic here because he represents a sense of security that Alina does yet feel with Mal.  But again, Alina does not allow her feels of attraction to  lead her into an ill-advised relationship.

I really like Bardugo’s love triangle because it never presents the villain as a viable option for Alina.  Alina may be experiencing some lust in regards to the Darkling.  She may harbor some feelings of tenderness for him and some hope that he will turn from his crimes.  She may even long for the type of relationship he could give her: one with two partners of equal social status and power.  However, Alina never uses any of these feelings as an excuse to date a man she knows is morally corrupt.  She never dates him believing that her love can save him.  Rather, Alina chooses a man of integrity to give her heart to.  And that’s a relationship I can get behind.

26 thoughts on “The One YA Love Triangle I Actually Liked”

Krysta has been checking out some literary cookbooks recently! She'll be reviewing this Little Women Cookbook and a few others on the future, so keep an eye out on our blog!
I won an ARC of Roxy, and frankly I am not sure I know enough about drugs to fully understand this book. 😳
I am thrilled to have received THE WILD WORLD HANDBOOK: CREATURES for review from @quirkbooks.
Recently Read: THE CURIE SOCIETY graphic novel from MIT Press. An inspiring YA book set in college that follows three STEM students as they are inducted into a secret society and need to take on a dangerous mission to protect the world. Full review will be on the blog in a few days.