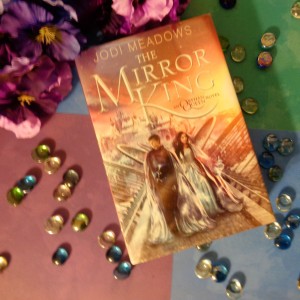 Wilhelmina has revealed her identity to the Indigo Kingdom.  They know now that she was both a criminal and a false duchess.  But now she lives as an honored guest of the kingdom, waiting for the day she will peacefully retake Aecor from its current foreign overlord.  If only Patrick Lien would stop killing people in her name!

Spoilers for both books ahead!

Sometimes a book is so bad, it’s good.  This one starts with Wilhelmina living as an honored guest of the Indigo Kingdom, now that she has revealed herself as the cause of the Inundation and the leader of the group who has killed the king.  Her actions have resulted in a great many deaths as well as the destabilization of a nation and the possibility that the wraith, thought to be years away, will devour the Indigo Kingdom far more quickly.  Fortunately, the engaged prince is in love with her, so everyone is willing to overlook how terrible Wil is at doing anything right, and even willing to pretend that one day they might politely hand back to her the kingdom they conquered.  With a premise this ridiculous, how could the book be anything but great fun?

I had thought that The Orphan Queen had a nonsensical plot driven by characters who make only nonsensical decisions.  The Mirror King makes the first book look like a serious and well-researched depiction of political intrigue.  Because now that Tobiah’s father is dead, the Indigo Kingdom can be run entirely based on Tobiah’s personal feelings instead of any logic or regard for laws or citizens.  But just in case the drama still is not great enough, the book introduces an increasingly random series of situations and characters who are there solely to make plot twists happen.  They might flatly contradict everything we know about the laws of magic, but that is okay.  This book never pretended to care about logic. It’s all about the action and the romance.

Part of the charm of this book is how much I get to laugh over everything that happens.  However, I have to admit that I still enjoyed every ridiculous moment.  I recognize that the premise is inherently flawed, that the characters do not do anything that makes sense, and that the story contradicts itself.  And I don’t care.  I still read it, wanting eagerly to know what bizarre plot twist would happen next.

8 thoughts on “The Mirror King by Jodi Meadows”

I cannot wait to read THE BALLAD OF NEVER AFTER by @stephanie_garber and this @owlcrate edition is beautiful!
New mass market #silmarillion so I don't ruin my fancy one! 😮
Flashback to when the teen section in Barnes and Noble sold these short paperback fairy tale retellings.
Some unexpected #bookmail from @quirkbooks! It's a picture book adaptation of FERRIS BUELLER'S DAY OFF.