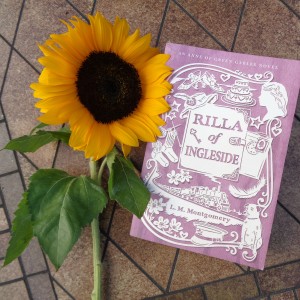 Fourteen-year-old Rilla Blythe is looking forward to her very first dance–and the handsome Kenneth Ford.  But when Canada enters WWI, her world quickly changes.  With her brothers off to war and her mother volunteering, Rilla is left feeling alone and useless.  But as she starts a junior Red Cross and rescues a war baby by carrying it home in a soup tureen, Rilla discovers she is stronger than she knew.

Rilla of Ingleside tells the story of the women who struggled on the Canadian homefront to support the men and boys they sent to World War I.  The sorrow of parting, the agony of waiting for news, the keen grief of losing a loved one–Anne Blythe’s family and friends suffer through it all, always hoping that the end of the war will show them that their sacrifices were worth something.  Anne of Green Gables has given many readers the impression that Montgomery writes cheerful children’s stories, but the final book in the Anne series reveals clearly Montgomery’s sensitivity to pain and suffering, and her dedication to writing realistically of the dark years she can never forget.

Stories of women on the WWI homefront are not particularly common, so Rilla of Ingleside feels like a special inside look at the sacrifices made by so many brave men and women.  Montgomery gives readers almost want amounts to a play-by-play of the war, depicting the excitement and despair of the Blythe household as they follow the news, plotting out the progress of the war on their maps and following the involvement of various countries.  Meanwhile, letters come to them from overseas, sometimes sharing news to be thankful for and sometimes bringing the news no mother wants to hear.  Rilla of Ingleside is the kind of book that makes you weep.  These are, after all, characters readers have grown to know and love.  And now they are facing death on the battlefield and heartbreak and loneliness on the homefront.

Montgomery, however, like her characters, holds out a glimmer of hope.  For Rilla, the war is tranformative.  She grows from a self-absorbed girl concerned with dances and beaux to a woman who give of herself to others and swallow her pride when it will benefit the community.  Suffering makes her strong and it is her strength, and the strength of all the women left behind, that suggests to the characters that they can build something new and beautiful out of their destruction.

Rilla of Ingleside is a beautiful, heartbreaking book that depicts a wide range of women as they respond to the circumstances life has placed them in.  It is not the type of story that fans of Anne Shirley would have hoped she would find herself in.  It is, however, raw and real.  And it will make you cry.

Looking for more Montgomery?  We recommend Montgomery books based on your Hogwarts House.

Today I’m joining in with the Anne of Green Gables series read-along hosted by Jane @ Greenish Bookshelf and Jackie @ Death by Tsundoku.  You can find the details here if you would like to read along, catch up with reading along, or join in with some of the bonus posts!

9 thoughts on “Rilla of Ingleside by L. M. Montgomery”