Classic Remarks is a meme that poses questions each Friday about classic literature and asks participants to engage in ongoing discussions surrounding not only themes in the novels but also questions about canon formation, the “timelessness” of literature, and modes of interpretation. We look forward to seeing your responses!

Do you think Satan from Paradise Lost is at all a sympathetic character? 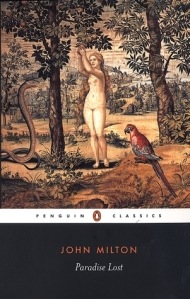 Whenever I see someone comment that Paradise Lost‘s Satan is a sympathetic character, I think they must be referencing the fact that Satan is given interiority in the text, that readers are presented with the rationale Satan uses when he decides rebelling against God is a good idea–justified, right.  After the invocation, the poem opens with a scene of Satan in Hell, rousing the fallen angels who followed him, and promising them great things and a chance to regain Heaven.  He explains that he is powerful too and that to repent now that he is banished would be a disgrace:

“To bow and sue for grace
With suppliant knee, and deify his power,
Who from the terror of this arm so late
Doubted his empire, that were low indeed,
That were an ignominy and shame beneath
This downfall” (111-116)

Satan can make moving speeches when he wants to, though he often appeals to negative emotions like hatred.  Readers, to some extent, get to see things from Satan’s perspective, and perhaps that is what some people refer to as “sympathetic.”  However, it’s clear that readers are not actually supposed to be on the side of Satan or think him in any real way wronged by God.  Readers are shown the steps of reasoning that Satan took to make his choices; they are not supposed to ultimately agree with him that they were good choices.

The opening invocation asks: “Who first seduced them [humans] to that foul revolt?” and answers “Th’ infernal serpent; he it was, whose guile / Stirred up with envy and revenge, deceived / The mother of mankind” (31-35). These are harsh, judgmental words, and they set the tone for how the narrator and God Himself speak of Satan throughout the text.  Satan is a deceiver, full of pride, sinful.  There’s no “trick” in the text here.  Readers are not supposed to consider the narrator unreliable or question whether God is right.  It is sometimes difficult for modern readers to take religious texts as seriously as the authors and contemporary audience did, but the veracity of God is taken for granted in this text.  Satan is given motivations in the poem, but he is not exonerated from his transgressions because of them.  I don’t think he is a sympathetic character.

If you are participating this week, please leave a link to your post below.