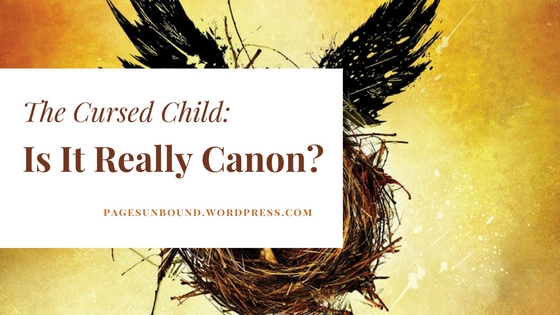 If you read the comments on Michal Schick’s article declaring Harry Potter and the Cursed Child fan fiction, (an article I refute), you will find a large number of fans declaring the new script not canon.  Alan Johnson, for instance, writes the following:

Arguing the merits of TCC as a stand-alone story is a different matter, but to call it canon means that we as the audience are being asked to compare TCC to the Harry Potter series and to hold it to the same standards. These “standards” are, of course, somewhat subjective and different for every fan/reader/audience member, but when a significant portion of fans feel TCC fails to meet the standards of canon established in the original series, then labeling TCC as canon becomes problematic. Does a story necessarily belong to the author? Or once the story is released into the world, does it then belong to the audience? In this case, I would say the Harry Potter fandom feels a significant degree of connection and ownership over the story. We give a lot of deference to JKR, but when she starts to push old, established “boundaries” (again subjective) too far in new works, we are free to push back.

Here Johnson argues that Harry Potter and his world no longer belong to J. K. Rowling, who created them, because fans like them.  The “standards” of canon to which he refer remain vague.  Perhaps he is saying that the story contradicts previously established information, but nowhere does he explicitly state as much.  Instead his argument, based on  his statement about “connection and ownership” seems to rest on a more subjective feeling that the play just does not match the power of the old works or that fans do not agree with it or like it, and thus fans are free to decide it does not exist.  (Or free to “push back,” as he writes–though that sounds a little aggressive to describe an interaction with a poor author.)

Slughorn’s Trophy Wife later enters this conversation and argues that the play is not canon because lines given to certain characters in some scenes were given to others in CC and that Lily and James being outside contradicts our previous knowledge of their lives.  She also says that she does not consider the story “100% Tier 1” canon.  A Google search did not provide any definitions for or references to such a term, but  Slughorn’s Trophy Wife refers to the theme park rides to indicate that she does not think everything Potter-related to be canon.  So, in this case, I think we are to assume that the commentator believes a thing is more canonical the more explicitly the creator is involved.

Are These Works Canonical?

There have always been debates about the works of certain authors.  J. R. R. Tolkien, for example, has tons of published material now, most of which his son Christopher released after his death. There are different versions of different stories. Which one is canon?  Are the versions Tolkien himself published canonical and the rest simply drafts?  What if he had published one story, then rewrote it, but never published the later version?  Which is canon?

And what about Star Wars?  When The Force Awakens opened, we learned the book content was no longer considered canon.  So what are the books if not canon?  How can something be canon and then rewritten?

And what about contradictions in an author’s own published material?  Sir Arthur Conan Doyle once called John Watson “James” apparently by accident. So is that story, by the logic of Slughorn’s Trophy Wife, no longer canon because it contradicted previously established information?  Alexandre Dumas seems to have shaky characterization in some of his stories–they’re so long he probably forgot what happened himself. Is The Three Musketeers no longer canon because D’Artagnan changes from installment to installment?

Maybe there are levels of authorial intent involved here.  Conan Doyle presumably did not mean to change John’s name, so we can safely ignore what could very well be a printer’s error.  And maybe we can say that what Tolkien himself published takes precedence over what are clearly drafts, though we might have more difficulty choosing the canonical work if faced with an early published version and a later revised but unpublished version.  But in that case, no doubt, scholars would first begin to see if they could discover whether Tolkien had been considering publication.  We might then say that the later version is canon, just as the revised Hobbit with an evil Gollum became canon after The Lord of the Rings.

The problem is, of course, that so often we do not know authorial intent.  If Tolkien did not write in his diary or to his publisher, we have no idea if he meant to revise or publish at all.  And then we begin to question all over again–what did the author mean or want?  Most likely we will then try to decide which version more closely matches all the other information we have about the author’s world–again leading us to the suggestion that contradictions are non-canonical.

But What if What the Author intends Upsets Fans?

Johnson, however, might argue that what the author wants to happen in their world is of little concern.  The fans have enjoyed the story and made it come alive, so now they have the authority to decide what happens.  This sounds kind of nice in theory–that is why we have fan fiction and shows like Sherlock.  It can be fun to play with our favorite stories and make them come alive in ways that are new, ways that make us see them afresh.

However, we are dealing with a living author here and the idea that the author no longer owns her works once she shares them with others becomes problematic.  Copyright laws exist because the author should be allowed to make money from her own intellectual property.  She created the world and it is hers to do with as she sees fit.

Saying that the work is no longer hers also seems disrespectful to creators.  After all, if I buy a pie that I like and enjoy, I would never argue to the baker that her business is my business now because without my purchase she’d be broke and without me her pies would have never realized their full potential as tasty desserts.  They would merely be pretty decorations in the window.  And yet this is the type of logic being thrown at authors.  Yes, ideas and stories are to be shared.  But this does not mean we should wrest creative control away from their originators, especially when they are alive and need to be recognized as the sole author in order to make a living.

But once copyright laws expire, the work of an author is still by definition canon.  Sherlock Holmes is canon.  Elementary and Sherlock, delightful though they may be, are not.

But What About All These Tweets and Pottermore Posts?  Are They Canon?

So the body of work of an author is, by definition, canon whether or not readers like it or agree with it.  But what is the body of work?  Slughorn’s Trophy Wife mentions theme park rides and video games while Emily at Rose Read explores all other bits of information Rowling has given us through the years from interviews to Tweets to Pottermore.

Here I do not consider things like video games and theme park rides to be canon.  Giving other people rights to your work so they can sell stuff does not mean you are giving them artistic authority. However, I do not see why an author providing material in forms other than traditional publication makes their work less valid.  Why should Rowling’s writings on Pottermore be taken less seriously than they would have been if she had published them in an encyclopedia format as was first suggested? Why should her words hold less weight on Twitter than they would if she bound them in paper and sold them at a bookstore?

The question of what is canon can indeed be tricky. However, in this case, it seems clear to me that J. K. Rowling was highly involved with the production of Harry Potter and the Cursed Child and gave it her approval.  It thus counts as part of her body of work (even with co-creators–Shakespeare’s work is still part of his canon his even though he collaborated!).  Finding small discrepancies like who says what dialogue does not invalidate the story, nor does not liking the story.  And the fact that the story is presented as a play rather than as a novel does not mean it is not part of her body of work.  “Body of work” encompasses various genres and forms.  If Rowling says this is canon, it is.

43 thoughts on “Is Harry Potter and the Cursed Child Canon?”