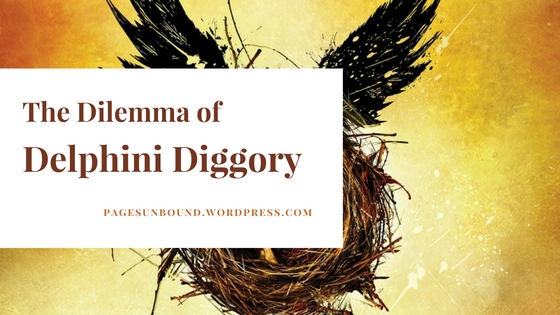 Harry Potter and the Cursed Child spoilers below!  Read at your own risk!

Perhaps of all the criticisms leveled at the new Harry Potter script, the most searing one has to do with the revelation of Delphini Diggory’s true identity.  I admit that even though I do not consider the story fan fiction, as the Internet has been clamoring, I was a bit disappointed by this plot twist.  Revealing the hidden heir of an old villain is hardly original and it borders on the ridiculous, especially in this case.  For years we have heard that Voldemort was incapable of love and that Bellatrix pined after him with an unrequited devotion.  Now suddenly the two of them did the deed?  Not for love certainly, but it still does seem like–dare I say it–a  fan fiction moment.  It is the fulfillment of a plot line readers previously could only have imagined, but most likely did not consider probable or even possible.

However, before I jump to condemn this odd moment in what I otherwise consider a solid drama, I have to consider the reasons Rowling may have included Delphini.  The number one rule of reading, after all, is to begin by reading sympathetically.  Only after you try to view the work on its own merits and to understand what it is saying–and not simply what you think it might be saying or ought to be saying–can you begin to break it apart.

Missing in the critiques of the story I have seen so far are mentions of Albus and Harry’s relationship; it seems that the time travel plot and the revelation of Voldemort’s heir are so sensational that they have overshadowed what I consider the true driving force of the play.  This is not, in the end, a time travel tale, nor is really another battle of good versus evil.  This is the story of Harry trying to accept his past and his son Albus trying to accept his present burdened by his father’s past.  In this way, having Albus attempt to change the past is fitting.  He cannot yet understand the sacrifices that had to be made, nor can he understand his father’s pain.  He cannot see how love sometimes has to accept loss and pain.

So where does Delphini come into this?  The Harry Potter books have always been about the power of love, with an emphasis on Lily’s motherly love for her son.  Rowling contrasts this love, prepared to die so that another might live, with the emptiness of Tom Riddle’s life.  Riddle does not know love nor how to love; that is the deceptively simple explanation for how he becomes Lord Voldemort.  He cannot begin to understand that love wishes the good of the other, that love puts another first.  If you think about it, Harry, an orphan starved for love himself, might have followed Tom’s lead and descended into self-pity or anger or resentment himself.  But instead he chooses to rise above the example provided to him by the Dursleys and, when tested, to give of himself instead of taking.  Now, in the eighth installment of his series, he and his son face a similar test.  But this time their choices are juxtaposed with Delphi’s.

Harry never knew his parents and, despite knowing that they did love him enough to die for him, we can see in this story that this created an emptiness inside of him that continues into his adulthood.  He hangs on to his childhood blanket.  He makes pilgrimages to Godric’s Hollow.  He suffers because he fears he is a bad father to Albus and he knows he has had few father figures to model himself on.  In a way, the story is about Harry always trying to fill in the gap his own father (unwillingly) left in his life; he does not want Albus to have a similar emptiness.

But Albus is experiencing just the opposite problem.  He does not have a hole in his life.  Rather, he has too much Harry Potter in it, and he has no idea how to deal with that and the expectations it brings.  In many ways, this is because he fundamentally misunderstands his father.  He believes his father, despite his childhood with the Dursleys, had a charmed life.  He had friends and popularity and he found everything easy.  Then he become famous for saving the world.  And Albus believes all of this means Harry does not care or else he would find a way to change the bad things that people keep saying happened because of him.  Voldemort did not kill Cedric; Harry did.

Both Harry and Albus are contrasted with Delphi, who is, though engaged in a maniacal plot to overthrow the world and create a new order full of murder and torture, really another lost orphan, another suffering child.  She and Harry are not so different.  She, too, wants to know her father and wants him to be proud of her.  She wants to fulfill her destiny and receive recognition.  She simply has the misfortune of being born to a father who did not model love and sacrifice but selfishness and ego.

The defining moment for them all comes in Godric’s Hollow.  Here Delphi and Harry want the exact same thing–another chance for being with their parents and feeling their love and approval.  The difference is that Delphi is willing to sacrifice everyone to get her father back, while Harry has to be willing to sacrifice everything to ensure the good of the world.  Harry experiences the pain and trauma of his parents’ death over again because he knows he cannot choose himself and risk everyone else.  And finally here Albus begins to understand his father.  Harry is not sacrificing lives unfeelingly.  The deaths are Voldemort’s fault–not Harry’s–and Harry has to live with the pain of them.

The lives of Harry, Albus, and Delphi intersect with one another to provide a further commentary on the nature of love and family in Rowling’s world.  Family is a legacy, a burden, an aspiration, a necessity.  Love is strange and terrible and beautiful and painful.  And though we understand love as a positive, love can be twisted and used as a justification for the most horrible of acts.  It’s all very messy and very complicated.  It’s almost like trying to figure out what love and family are and what your place in them is, is a constant reassessment of who you are and where you came from–and where you wish you could be.  And who among us, if given a Time Turner, would not be tempted for a moment to figure out if we could indeed change our place in the world?