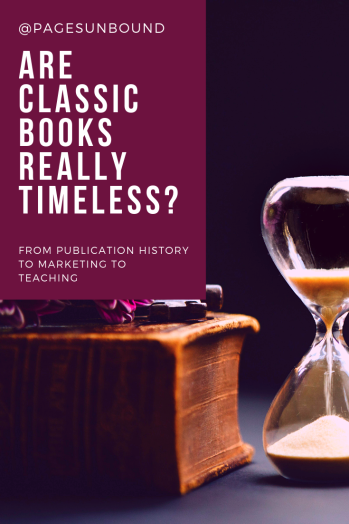 Ask someone what a “classic” book is and probably they’ll tell you something about how it “stood the test of time”–presumably because of its “universal values.”   But it’s somewhat disingenuous to suggest that books survive based solely on their merit.  Their are obstacles at every step of a book’s life–and not clearing them all does not mean a book is bad.  Similarly, clearing them does not mean a book deserves a classic label.

For a book to become a classic, it first has to move from manuscript form to book form.  Consider that:

At any stage, a manuscript can be rejected or accepted for what may seem like arbitrary or unfair reasons.  A manuscript may even be rejected simply because the author failed to follow directions or otherwise seems difficult to work with.  Literary talent often has nothing to do with one’s successes or failures.

For a book to survive to be a classic, it also needs some staying power.  It’s difficult to be inserted in the canon when no one has heard of your book!  Consider:

A book may never have wide appeal because not enough people heard of it.  A great book may fall into obscurity while a sub-par book rockets to the top of the bestseller list.

A book often needs to be heard of and presumably taught to be part of the canon.  Instructors choose books for various reasons, not necessarily the ones you think.

Canon formation often comes down to economic factors, power structures, and personal taste.  We revere the canon as the best the Western world has to offer, but we also know that it has traditionally ignored female writers and writers of color.  It’s not because only white men write really great books–it’s because historically white male writers have had more resources,  have wielded more power, and have written the types of books that critics and instructors have deemed worthwhile. But just because someone writes a different kind of book, that doesn’t mean she’s not writing a great  one.  A book that perhaps should be given the chance to become a classic, too.

14 thoughts on “Are Classics Really “Timeless?””