Every year on March 25, the anniversary of the Downfall of Sauron, the Tolkien Society hosts Tolkien Reading Day. This year’s theme is life, death, and immortality. The primary goal is to promote the reading of the works of J. R. R. Tolkien! To celebrate, Pages Unbound is hosting two weeks of Tolkien-related posts. In addition to our own thoughts, we will be featuring guest posts and interviews! 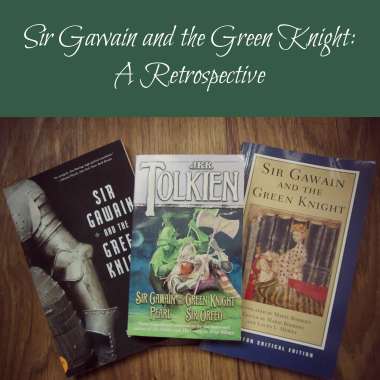 It’s no secret that my love of medieval literature is partly derived from Tolkien. He introduced me not only to the feel of the Middle Ages and romantic literature through The Lord of the Rings, but also to fundamental texts like Beowulf and Pearl. So when I had to write an English literature research paper my senior year of high school, I turned to Tolkien’s translation of Sir Gawain and the Green Knight (a very good translation that has earned a lot of scholarly respect, much to the surprise of people who still only think of Tolkien as a fantasy author and not also a highly respected medievalist). As I sit through grad school seminars now, re-looking at Sir Gawain once in a while, it’s striking to me how perceptive my high school self was about ideas like “anti-quests” and how much I still think the poem, ultimately, presents Gawain as a hero.

“A challenge, a quest, and a touch of the supernatural embodied in a brilliant green knight–the opening scenes of the medieval alliterative poem Sir Gawain and the Green Knight point to a traditional romance. Further reading, however, upends the impression. For Gawain embarks on an anti-quest, a mission not to find but to lose, to give himself up to death. It will not be the destination that matters, but the journey. Along the way, Gawain will discover, through failure, that he is more human than saint, but it is this very humanity that will make him the greatest knight of all.”

This remains my overarching interpretation of the open: Gawain is a good man, the greatest of Arthur’s knights, even though he has flaws. The incredible difference between Gawain and the rest of Arthur’s court is that he tries. He tries to defend Arthur’s honor, he tries to keep his promise to meet the Green Knight and seek his own death, and he tries to follow the ideals of chivalry even when it’s hard.

There are a number of opposing arguments to this interpretation, but so far none of them have swayed me. Last year. one of my professors astounded me (and the rest of the students) by commenting that the Green Knight never actually challenges Gawain to a Beheading Game. This is true, though generations of scholars have mislead readers by consistently referring to it as the “Beheading Game,” in capitals, as if it’s a serious and well-known tradition. Yet Tolkien’s translation of the Green Knight’s challenge reads:

“If any so hardy in this house here holds that he is,
if so bold be his blood or his brain be so wild,
that he stoutly dare strike one stroke for another,
then I will give him as my gift this guisarm costly,
this axe–’tis heavy enough–to handle as he pleases” (34).

One stroke for another, that’s it. No decapitation specified. My professor’s argument, then, is that Gawain is brash and a cheater. He finds a loophole: make the strike a fatal one, and he’ll never have to suffer one in return. He’ll get the axe, free of charge. But this is lowly. The “correct” way to meet the challenge is, apparently, to give the Green Knight a tiny nick, a scratch, and suffer something just as minor in return. Gawain’s failure to see this strategy is a black mark on his character.

I disagree. While Gawain’s jumping to “death” as an appropriate end for the challenger is needlessly violent, and there probably is some criticism there in the poem about cruelty in pursuit of honor, I still have to respect Gawain for being the only knight to do anything at all. Arthur himself has to attempt to accept the challenge before Gawain intercedes; everyone else was going to allow this unknown interloper to mock the cowardice of Arthur’s court. And when Gawain’s “loophole” doesn’t work out because the Green Knight keeps living with his head unattached, he accepts the consequences. He diligently goes to accept his payment stroke a year and a day later. Along the way, he also exhibits other knightly virtues, such as being a respectful guest to his host and rejecting the amorous but adulterous advances of a beautiful woman.

So if Gawain fails one more time by accepting a supposedly magical girdle in an attempt to “cheat” and save his life from the Green Knight’s payback beheading stroke, I find it hard to blame him. There are a lot of other sins tied up in taking the girdle–lying to his host, believing in magic rather than the grace of God, failing to face death bravely–but why do these have to negate his virtues? And why should I, or other readers, find these sins unforgivable if the Green Knight himself, the one whom Gawain most offended, absolves him? Gawain isn’t perfect, but he set out on a journey to test himself that no one else would even start. If he discovered that he has limitations, he didn’t “lose;” he learned something valuable about himself and how he can proceed in the future.

And so I conclude my paper with words I still believe:

“When Gawain returns to Camelot, the court laugh at his tale. Their perception of the green girdle and its significance are colored by their personal lack of experience. They, who never left Arthur’s halls, who never had the course to take the challenge and begin the journey, failed at the outset. In the end, they are lacking not only in glory, but also in understanding.

“As Gawain recounted his tale, he must have lingered over what they considered to be all the wrong parts. He must have told the tale as the poet did, focusing on morals and choices rather than fell monsters and intrepid deed. Thus, their laughter. The court choose to see the girdle at face value, what it would be if Gawain’s quest were what it initially appeared to be–another strange adventure in a land full of such adventures. To them, the girdle is a sign of bravery and not of shame, and so they adopt it as their own. Consequently, Gawain is left on an elevated plateau where he stands alone in faith, knowledge, and moral courage–the greatest knight of all.”

4 thoughts on “Sir Gawain and the Green Knight: A Retrospective”